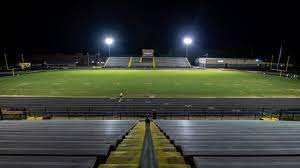 Hendersonville and Ravenwood squared off tonight, in a battle that went right down to the very end.  It was an exciting game from the jump, Ravenwood had the first possession of the game and scored within the first minute.  Hendersonville didn’t waste any time scoring right back within three minutes of the game.

Each team matched score for score, as neither of them could find a way to stay ahead of the other. The Raptors scored on their second to last possession to put them up 35 to 28.  Hendersonville on their last possession had a fourth and five on the 50-yard line and couldn’t convert.  Ravenwood ran the clock out and extended their win streak to five.

The Commandos Receiver Ellis Ellis Said,” it hurts, but in practice, we got to give it our all and we have to make a couple of extra steps on defense and offense.  I feel like the team needs to come off the ball more and we will do better.